Far From This Land

A Memoir About Evolution, Love, and the Afterlife 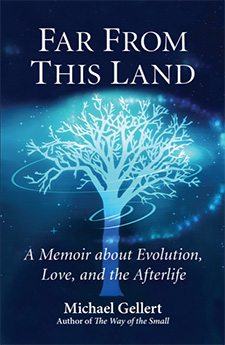 "This book is a beautiful, towering accomplishment, and a powerful response to the challenges our species faces at this critical hinge of history."
—Larry Dossey, M.D.

Far From This Land is inspired by the author's dreams and visionary experiences in response to brain surgery. Unfolding as a dialogue between different parts of his personality, its story is told from the perspective of an alter ego, a skeptical part of him that could not believe and accept these astonishing dreams and visions. Throughout his story he is resistant to accepting his near-death experience (NDE)—an extraordinary one by most standards. He has to fight his way to embracing, reluctantly, the implications this experience has for his personal development as well as his understanding of human evolution. The book explores such topics as the workings of the unconscious mind (dreams, visions, and paranormal phenomena); the evolution of consciousness and of our planet; and the psychological and spiritual dimension of climate change.

FAR FROM THIS LAND

"Michael Gellert's wonderful new book is a fine testament to the power of illness to transform us. An illness itself is an altered state of consciousness. I greatly admire Michael's ability to use his own struggles to help and to heal others. This book is a delightful treat for all of us who are fascinated by the incredible healing powers of the unconscious mind."
—Raymond A. Moody, Jr., M.D., Ph.D., author of Life After Life, research pioneer who coined the term "near-death experience"

"A most unconventionally convincing story, so breathtaking that I had to periodically pause to come up for air."
—Barbara Brown Taylor, New York Times-bestselling author of Holy Envy and Learning to Walk in the Dark

"Far From This Land is a thoroughly enjoyable reading experience, rich with challenging insights and presented in a unique, down-to-earth, approachable manner. It's not exactly about philosophy or psychology or marriage, yet it wraps all these together into a single, enthralling story that gives the genre of magical realism a whole new meaning. It shows how the world is its own magic. I recommend this book most highly."
—Gary Granger, Humanities Professor Emeritus, Vanier College, Montreal

"This is a remarkable book that sets in motion the dreamscape of the unconscious mind. Gellert applies Jung's active-imagination techniques with great originality. The evolutionary material is fascinating, taking a deep dive into the philosophy of theologian Pierre Teilhard de Chardin, among other things."
—Wendy Goldman Rohm, New York Times-bestselling author

"Far From This Land is spellbinding and numinous. I live in Los Angeles where it almost never rains and even more rarely is there thunder and lightning. While I was reading this book, a thunderstorm appeared and a bolt of lightning struck a tree next to my home, causing the tree to fall only inches away from it. This was an apt metaphor for my experience reading this memoir. It is earth-shattering and extremely powerful, yet often light and funny. Filled with vivid, mesmerizing dreams and imagery, it is an important work that you will want to read and reread!"
—Ann Walker, Ph.D., Book Review Editor, Psychological Perspectives: A Journal of Global Consciousness Integrating Psyche, Soul, and Nature

"Teilhard de Chardin once observed, 'matter is spirit slowed enough to be seen.' Michael Gellert's Far From This Land is an extraordinary exploration of the interweaving mysteries of the cosmos and of the human brain. Utilizing 'active imagination,' he challenges the historic splitting of spirit and matter and experiences a merging of the two in his dialogue with the disparate parts of the psyche. His story is a compelling mystery investigation, in the best sense of that word."
—James Hollis, Ph.D., Jungian Analyst and author, most recently of Living Between Worlds: Finding Personal Resilience in Changing Times

"Far From This Land is one of the most profound and eloquent rebuttals of materialism to appear in this century. Psychoanalyst Michael Gellert's experience during brain surgery opened doors to the nature of consciousness foreshadowed in the works of Pierre Teilhard de Chardin and C. G. Jung. This book is a beautiful, towering accomplishment, and a powerful response to the challenges our species faces at this critical hinge of history."
—Larry Dossey, M.D., author of One Mind: How Our Individual Mind Is Part of a Greater Consciousness and Why It Matters

"Why isn't humanity pulling together to navigate these apocalyptic times to create a better future? Racism, war, and obscene gaps in wealth divide us. A less obvious, even more fundamental evolutionary barrier to knowing our common human nature is the sharp conflict between science and religion, matter and spirit. This book is a call to imaginative self-discovery which anyone can find within their own psyche. Michael Gellert models the method for this in his captivating story of personal evolution through confrontation with our own inner divides. Great preparation for coming together at last!"
—Elisabet Sahtouris, Ph.D., evolution biologist and futurist, author of EarthDance: Living Systems in Evolution and other titles on sahtouris.com

"As a Jungian analyst, Gellert knew he had experienced something unique and he does not disappoint in the retelling of his extraordinary encounters. These accounts of his active imaginations in which he interrogates the conditions of an 'other-world' or other dimension are thoughtful and thought-provoking. It is brave work to bring such personal and intimate experiences to print and he does so with honesty of purpose and as a result we are able to journey with him. In many respects, Gellert's experience compares with Jung's own in equal exploration of the nature of dreams, visions and the meaning we make from them."
—Stephani L. Stephens, University of Canberra, Australia, author of C. G. Jung and the Dead: Visions, Active Imagination and the Unconscious Terrain

"A miraculous book about a world just out of reach--or at least just out of reach when we are awake and sober--yet the source of inspiration for mystics and poets throughout history. It may upset your views on what is possible. Read it at your own risk!"
—Allan Combs, Ph.D., neuropsychologist, Director of the Center for Consciousness Studies at California Institute of Integral Studies, and author of The Radiance of Being

"I truly enjoyed Michael Gellert's impressive, compelling, and visionary story. He demonstrates the power of active imagination. Like Jung's Red Book, this book makes us think about reality in a new way, offering a window into realms of the psyche of which we are usually unaware. Far From This Land is also an inspiring act of courage and love in the face of serious illness."
—Lionel Corbett, M.D., professor of psychology, Pacifica Graduate Institute, and author of The Religious Function of the Psyche

"The time has come for the return of the archetypes to our society. Author Michael Gellert has presented Jung's ideas on the archetypes in an original and evocative manner that, by itself, will captivate you. Additionally, you will learn something very important in the way that consciousness builds the world through us. Your waking up to the archetypes is the purpose for the play of consciousness."
—Amit Goswami, Ph.D., quantum physicist, Professor Emeritus, University of Oregon, and author (with Valentina Onisor) of Quantum Spirituality and The Quantum Brain

"In Far From This Land, Michael Gellert, a well-respected Jungian analyst, shares with us his near-death self-exploration through his work with his dreams, and he does so in a tender, instructive, and captivating way."
—Peter A. Levine, Ph.D., author of Waking the Tiger: Healing Trauma and In an Unspoken Voice: How the Body Releases Trauma and Restores Goodness