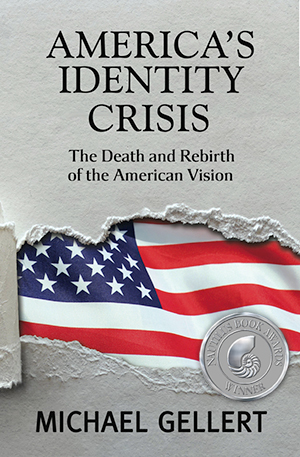 "A large-scale analysis of this country on a par
with Tocqueville . . . an important book."
—Howard Zinn

America's Identity Crisis is an in-depth historical and cultural study of what Jung called America's "heroic ideal," the driving force of its national character. In shaping the American experience, this ideal is very much the source of both America's greatness and its problems. Michael Gellert argues that this ideal cannot adequately meet the complex challenges of the modern world, yet America remains fixated upon it. Although the nation's original heroic ideal as articulated by its founders had a powerful redeeming and guiding vision, Americans are at a loss as to what this means in a contemporary context. The author explores what the nation must focus on in its public discourse and in the education of its citizens in order to meet the challenges of the 21st century.

Note: The first edition was published under the title of The Fate of America: An Inquiry into National Character. This new edition has an updating Preface and an Appendix on the Trump phenomenon's paradoxical effect.

Preface to the New Edition
Introduction
Part I: America's Heroic Ideal
Prelude: The Aspiration Toward Greatness


The Spirits of Youth and Authority
One Plus One Equals Three
America's Alternating Current
America's Bias
The Fallout from Fallout Out of Balance
A Big Bang
The American Heroic Ideal, Yesterday and Today

A Distant Galaxy
The Recognition of Necessity
The Cultivation of Character

Part II: The High Life
Prelude: The Metaphor of Height


The Cult of Prosperity
The Fantasy of Unlimited Possibilities
The Culture and Economics of Excess
A Healthy Ability to Say "No": A Gift of Depression

The Cult of Celebrity

Getting High: The Cult of Passion
The Meaning of the Drug Epidemic

The Heart of the Matter

The Ossification of Authority
The Cult of Cynicism

The Journey of the Hero and Beyond

Part IV: The Fate of America
Prelude: The Unpredictable Nature of History


Oppurtunity Repeats, History Knocks
The American Vision as a Paradigm of Integrity
The Canvas of History
Conclusion

Appendix: The Trump Paradox Notes
Acknowledgments
About the Author

"Our nation leads the world in the race for ever-increasing technological capacity and excellence. Why is it we are not equally dominant in the race for spiritual excellence? This fascinating, insightful, psychological profile of the American psyche offers answers that both enlighten and stimulate."
—Governor Mario Cuomo, author of Why Lincoln Matters: Today More Than Ever and Reason to Believe

"A large-scale analysis of this country on a par with Tocqueville . . . an important book. It raises serious questions about our country, makes perceptive observations about our culture, and provokes us to look inside ourselves in a critical, yet constructive, way."
—Howard Zinn, author of A People's History of the United States

"This is a book of profound and timely importance. Michael Gellert delineates the dilemma facing contemporary America with the insight of a scholar and the heart of a sage. His philosophic understanding of the American character as played out in our national history is both unique and deeply engaging. In drawing on the fantasies, cults and motifs that have shaped our heroic sense of mission, our belief in unlimited possibilities and our quest for salvation in material wealth, he shows how we have drifted from the vision laid down by our founding fathers.... The serious reader of history and philosophy will find thought-provoking information and ideas in this eloquently written book by Michael Gellert."
—Selwyn Mills, Ph.D., author of The Odd Couple Syndrome

"A broad-ranging, cogently argued, and provocative critique that has taken on a whole new dimension since September 11."
—Library Journal

"Crafting an enjoyable read filled with anecdotes and commentary from philosophers and historians, Gellert makes a compelling argument that the unbalanced American psyche has led to a divided country on the edge of peril. His precise language is easily accessible as he discusses today's cultural and political atmosphere and how the country became divided. Charting the path of extremes America has traveled, he captures the opposing factions that have been at work in the country from the beginning. Gellert calls upon the citizenry to learn from history and educate itself to ensure the United States follows its moral compass and respects its historic ideals."
—The US Review of Books

"Thoughtful and thought-provoking, America's Identity Crisis: The Death and Rebirth of the American Vision is an extraordinary analytical survey of the contemporary American political, cultural, social, and economic issues that have resulted in a deeply polarized body politic and the erosion of respect for America's institutions and core values. Exceptionally well written, organized and presented, America's Identity Crisis is unreservedly recommended for both the community and academic library, Contemporary Social Issues collections in general, and Political Science supplemental studies lists in particular. It should be noted for students, academia, political activists, social reformers, and non-specialist general readers with an interest in the subject."
—Midwest Book Review

"Gellert (C. G. Jung Institute) offers a fascinating meditation on the American national character, which he describes as the pursuit of a heroic ideal and an aspiration for greatness. . . . The author offers a captivating perspective, worthy of serious attention."
—Choice

"This is a very fine book, written with erudition, conviction and a point of view that is always clear, without being dogmatic. It is not only an essential read for any American with a curiosity about our 'national character,' but also for citizens of the rest of the world who want an in-depth, accurate portrait of the American psyche. . . . One senses beneath the surface of Gellert's easy writing style how profoundly upset and distressed he is by our American national character. Ultimately his book can be read as a passionate plea for a transformation in depth of who we are as a people—a transformation that no one person can nor will achieve. For Gellert, the fate of America hinges on our capacity as a people for 'spiritual revitalization' and the 'renewing of our vision.'"
—Thomas Singer, M.D., Journal of Analytical Psychology

"I found Michael Gellert's book a great comfort in the days following September 11. His view of the need to understand the impact of the heroic ideal on American history and culture could not be more timely. His ability to weave the social, the political, and the historical with the psychological, universal patterns of human behavior is truly impressive."
—Steven J. Frank, Ph.D., Jungian Psychoanalyst and Director, Kieffer E. Frantz Clinic, C. G. Jung Institute of Los Angeles

"The Fate of America tackles a very difficult topic. It tries to describe and define the national character of the United States. This is in a certain way an impossible task and yet a very important one. The national character of every nation always in some way escapes us, yet we have to try to catch it. Michael Gellert very well succeeds to show the different—the negative and the positive—sides of [the "heroic ideal,"] a particular national characteristic of America. I very much appreciated his concern with American innocence. . . . Although America is today the most important nation in the world, it is all the same hardly ever understood. I hope the book will be read by many politicians and people in general, both in America and abroad."
—Adolf Guggenbühl-Craig, M.D., author,  former President of the C. G. Jung Institute of Zurich,  former President of the International Association of Analytical Psychology

"The Fate of America is an excellent work. I love the way it concludes. It's a fine piece of scholarship, well-written and easily understood. It should have, I hope, a very large audience."
—J. Marvin Spiegelman, Ph.D., author and Jungian analyst

"A publication which combines so essential a historical review with so incisive an analysis of American culture offers us all a timely moral challenge. Michael Gellert, whose personal copy of The Fate of America just happened to arrive, after years of thoughtful research, on September 11, 2001, provides a provocative guide to the evolution of America's heroic ideal and the dire necessity for its transformation. Gellert preserves the upside of the original vision of America's heroic ideal, but captures the worst of our dissociation from it. Gellert's study is accordingly a sober guide to the extremely troubling collective phenomena of our culture and the myths which envelop them. Yet it is a challenge to deep individual reflection by all of us, and hopefully a prelude to constructive political action."
—Bradley A. TePaske, Ph.D., author of Sexuality in the Religious Imagination